Australia pulled off a sensational upset in today's first quarter-final of the WSF Women's World Team Championship in Nimes when former world number one Rachael Grinham and world No17 Donna Urquhart led the team to a 2/1 win over fourth seeds Hong Kong which takes the sixth seeds into the semi-finals and guarantees future funding for elite squash in the country.

Urquhart then took to the court against Joey Chan, the Hong Kong number two ranked just a single place below the left-hander from New South Wales. Less than 24 hours earlier Chan had recovered from 5-9 in the decider against underdogs South Africa to take the fancied fourth seeds into the last eight.

But Urquhart played one of the most focussed game of her life to overcome Chan 11-5, 11-6, 11-8 and assure her country an unexpected - but all-important - place in the elite world's top four.

The Brisbane-based 25-year-old was immediately engulfed by the Aussie camp on court as they celebrated their surprise triumph.

"I just can't believe it," said Urquhart, close to tears. "I have been extremely nervous over the last couple of days - my hand was literally shaking in the knock up before my first match against Canada. I was a nervous wreck. Playing for your team is so different from playing for yourself.

"But today I had to forget about all that - I knew I had to stay calm. Joey is a tough opponent. I just concentrated on the simple stuff, like taking time over my service - everything else came easily after that.

"I couldn't watch Rachael's game - I had to go away from the court and put my headphones on. That helped keep me calm.

"We didn't expect to get this far - but I didn't want to let everybody down."

How did the match rate alongside others she has played? "It's definitely right up there. To play a match like that and not let it get to me - I'm proud of that!"

After giving Australia the lead, Grinham said: "I guess I'm struggling with my motivation on the Tour right now - but I feel I have that back again now, playing for the team. You've got a lot of people counting on you.

"It's a great feeling playing for your team - but, stressful though it is, I really did enjoy it!"

Australia's team manager Vicki Cardwell was overjoyed with the result: "It's magnificent," said the illustrious former world number one whose daughter Sarah Cardwell, the third string, was saved playing a potential decider.

"It was bad enough watching from the side-lines during the first two matches - but it would have been brutal if Sarah had had to play a vital decider!

"Rachael played the best I've ever seen her and Donna the most disciplined I've ever seen. They both knew at the beginning of the week that we would be expecting them to play in all our ties. That's a huge responsibility and they've stepped up to it.

"We've had a wonderful team spirit here - with support also from team coach Sarah Fitz-Gerald and our physio Patrick Hermanns, who's been invaluable.

"You can't overstate the importance of that win," Cardwell continued. "We're in the rebuilding stage - and to have come here with two of our younger players is important as we can't expect to be able to rely on the likes of Rachael for much longer.

"We came her to make our seeding - so to be in the semis is just amazing. It's heartening for our kids back home," Cardwell concluded. 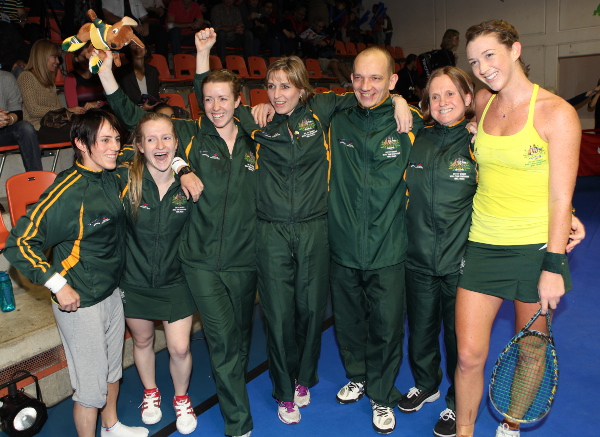